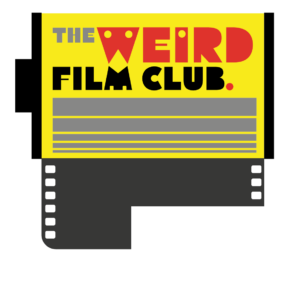 This time with Alec and Jess we loosely discussed the idea to photograph portraits of loved ones. Interestingly enough, it coincided with the FIND lab’s monthly challenge to be inspired by Dan Winters’s  body of work, his iconic portraiture, and that look of his, and capture that inspiration on film. So I set my mind on finding inspiration and participating in the challenge, I went analyzing his images.

My goal was not to become Dan Winters, that is an unreasonable goal, totally out of my reach: he is a true master of the craft and his use of light is incredibly sophisticated, and that’s not even to mention that he has equipment and people working for him which I lack access to. But the exercise intrigued me. So as I looked closely at his work I began noticing his playfulness, with light, with his subjects personalities, with posing. I was struck by what I call his “stare into the abyss” pose: absent, as if the subject weren’t fully there in front of a camera, as if this wasn’t a pose.

This expressive playfulness, that’s what I decided I wanted to work on.

So I packed the minimal amount of artificial light I felt I was going to need, I grabbed the entire family (and some entertainment for the kids), and we headed to my husband’s (Moritz) office at the Physics Department of UW Madison.

We chose to shoot this round of images on Kodak Vision 3 500T in medium format. This is a cinematic film, coated with remjet. Most labs don’t want to process it, and I’m more of a DIYer anyways, so I spent some time scouting youtube tutorials and that thing came off like a charm with a presoak in washing soda and a post-rinse/gentle thumb massage in dish soap.

I shot these with a Yashica Mat EM. I had initially planned to use my Kiev88, but its light leaks are a little out of control, which felt contrary to the spirit of shooting in the manner of Dan Winters. He is a technical master after all, his style is not really about embracing the wild curveballs your camera is going to throw your way…

So here’s the result. As always, not everything worked the way I wished, but other things worked better than I thought they would, so overall this is a win. And I’m looking forward to shooting more of that remjet coated film, it’s beautiful!

1. when his brain lights up with an idea

I made this image by projecting a filament lightbulb through a magnifying glass.

Focussing the light was hard, and it didn’t really do what I thought it would, but the result expresses so well how a new idea feels – to me at least:

– it’s an inner light, inside the brain

– it brightens everything up: eyes, days, the future

– it’s subtle, fleeting, can be lost in an instant

– and it’s distracting as f*ck.

A new idea, to me, is totally irresistible.

Moritz on the other hand has better self-control over his brain, so he doesn’t let it derail his life or anything else he’s got going on. As you can see, he can look the other way, finish what he’s doing, then ponder it, and decide if it’s worth his time. 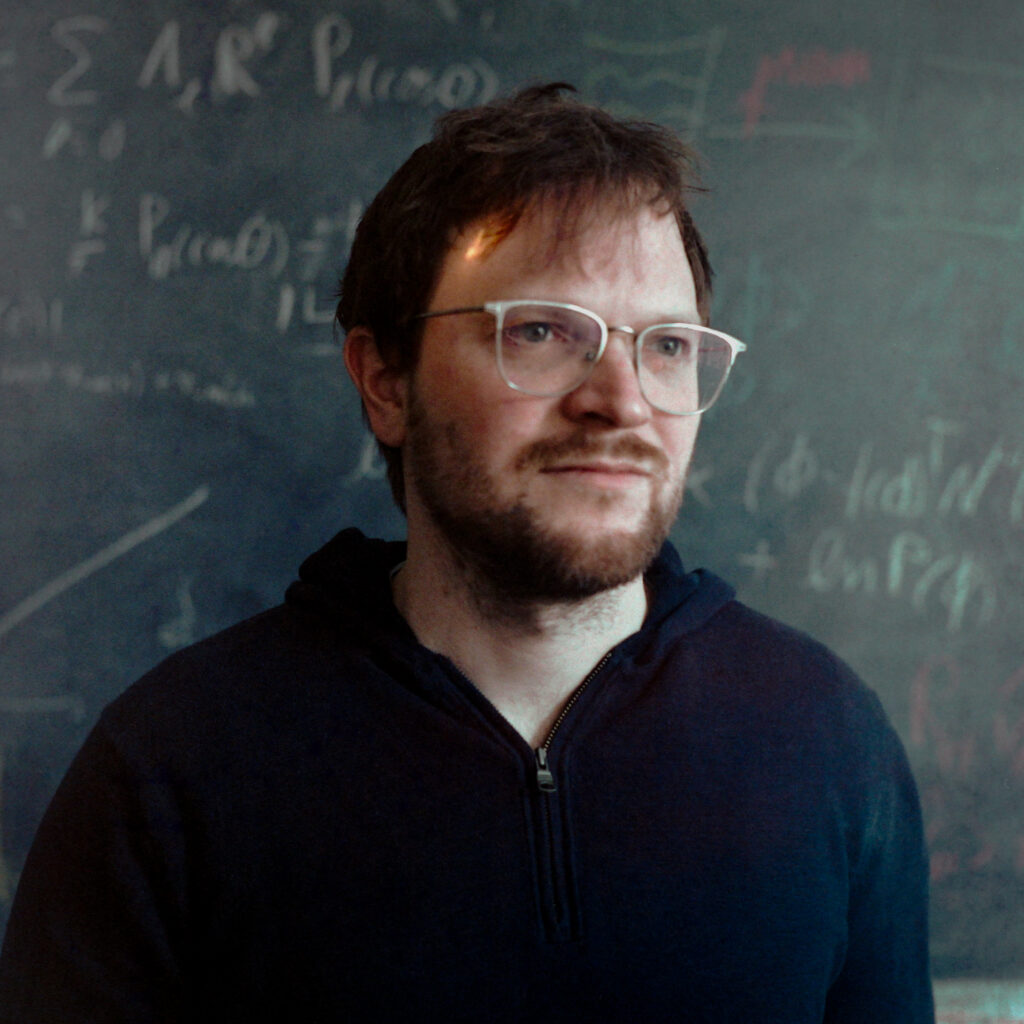 2. he reads the world in math, equations are his love language 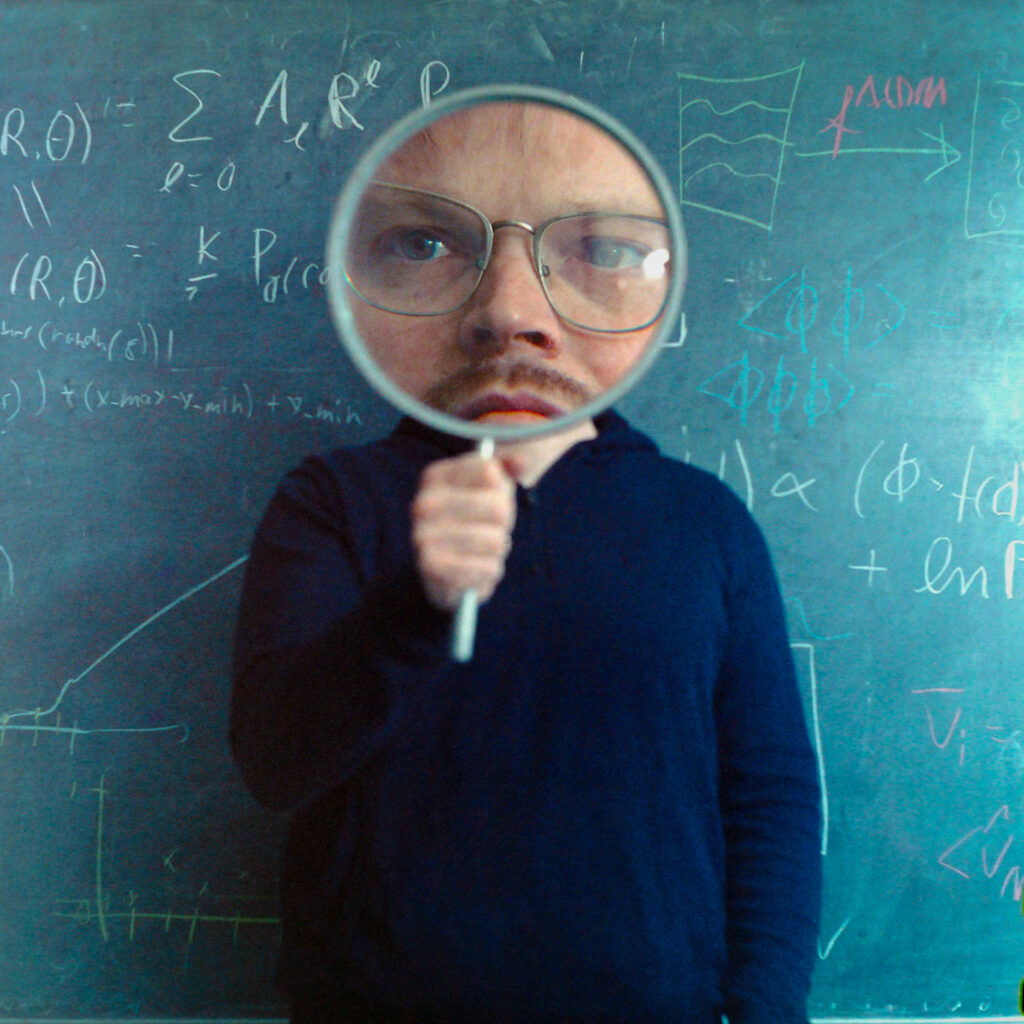 When he choses to pursue an idea, investigate it, Moritz is a machine: thorough, organized, he turns everything into equations.

Mathematics is his language.

And he’s not an empty bubblehead.

This image is the most fun of the series. It makes me chuckle, Moritz smiled when I showed him, our kids burst with laughter when they see it, and instagram loooooves it. The only person it left impassive was the man who manages the lecture resource center at the department – when Moritz showed it to him, I was told he mumbled something about this being one of the most common demonstrations in the classroom… I think he missed the point.

Yes, this was probably the easiest, most straightforward, photograph of this series to imagine, plan for, setup, focus, and shoot.

But isn’t it funny how sometimes it’s the simplest things that work best?

This image was directly inspired by a few of Dan Winters images, where he puts a light source, usually pretty bright, on set, but the real light comes from somewhere else, usually the other side.

This effect hasn’t really worked on my image, but I was fascinated by the illusion, the lie of where the light comes from, and how special and eerie it makes the images look.

I also wanted to tap into the cliché of the lightbulb moment. I also think it is a lie.

To me, when you have a lit lightbulb hovering over your head, the idea is already out. Rather than being a moment it’s a process: it’s about expressing it, showing it, illustrating it, formulating it, so that the rest of the world sees it too.

That’s how you birth it, not with an illuminating moment, but finding a way to make others see it, and that’s hard work. It doesn’t just happen, you make it happen. 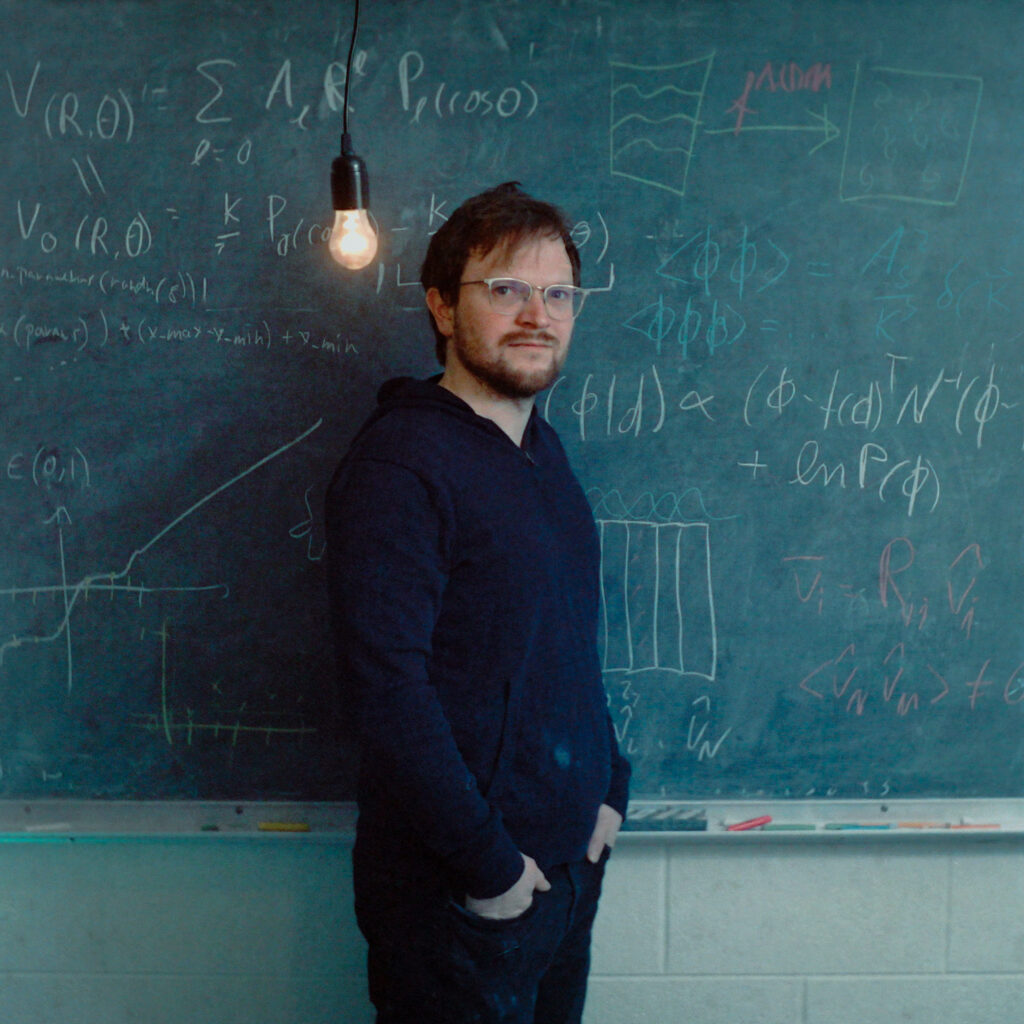 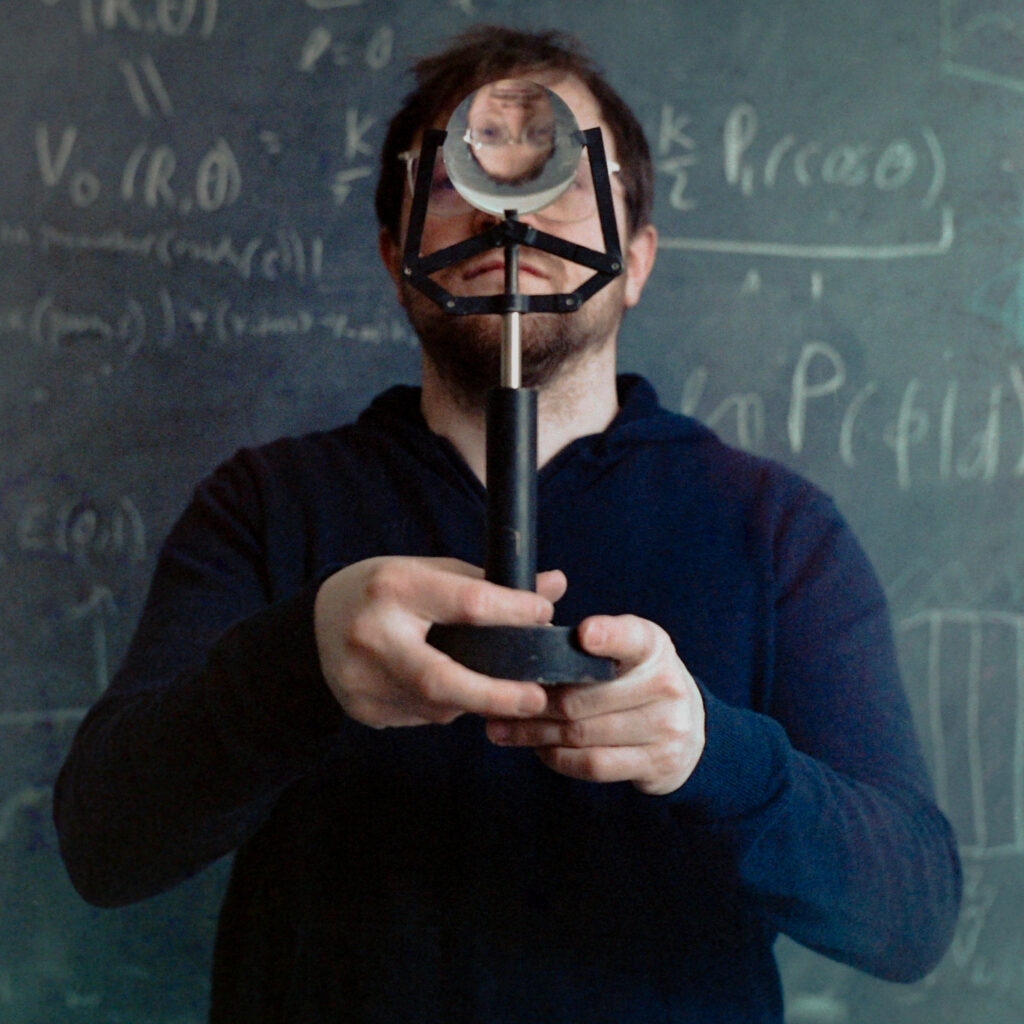 This image is not as striking as the other ones, but to me it’s very important.

It speaks of creativity and intuition.

Creativity first: when you flip things upside down it helps with perspective and creativity. It’s an easy tool, and it’s very powerful: when you’re trying to innovate or renew something that everyone knows and uses, remove features from your object, the more essential, the better; displace it all together and it will reinvent itself; or imagine a “what if” scenario… that’s the idea. Flip it on its head to open new creative avenues.

And intuition too: That lens holder follows the shape of his skull and the lens falls where some believe our third eye, the “organ” of intuition, lies.

Creativity and intuition, two qualities essential to Moritz’s work and that I value so deeply.

5. and then it flashes

This is a candid shot. Moritz thought I was fiddling with a prism so he zoned out on his phone.

I like it very much, and for several reasons.

The first reason is that I captured his likeness from a backlit silhouette, like Dan Winters captured Barak Obama staring out the oval office’s window.

But then there’s also the fact that I reveal my scrappy setup. There is something special about that, not making a perfectly curated image, but revealing what’s behind that headshot, the process and the work, because, like ideas, things rarely just happen.

As you can see, I pulled the blinds on one of his windows because I wanted to control the light, but not both blinds because the light was soft and pretty and I wanted that (and that’s also likely why not all of my Dan Winters experiments worked: there was too much ambient light to craft the shadows, and backlights and all that he does to get his look). Then, to add light, I taped a speedlight to a little umbrella and balanced it on a small stand propped on boxes and furniture. 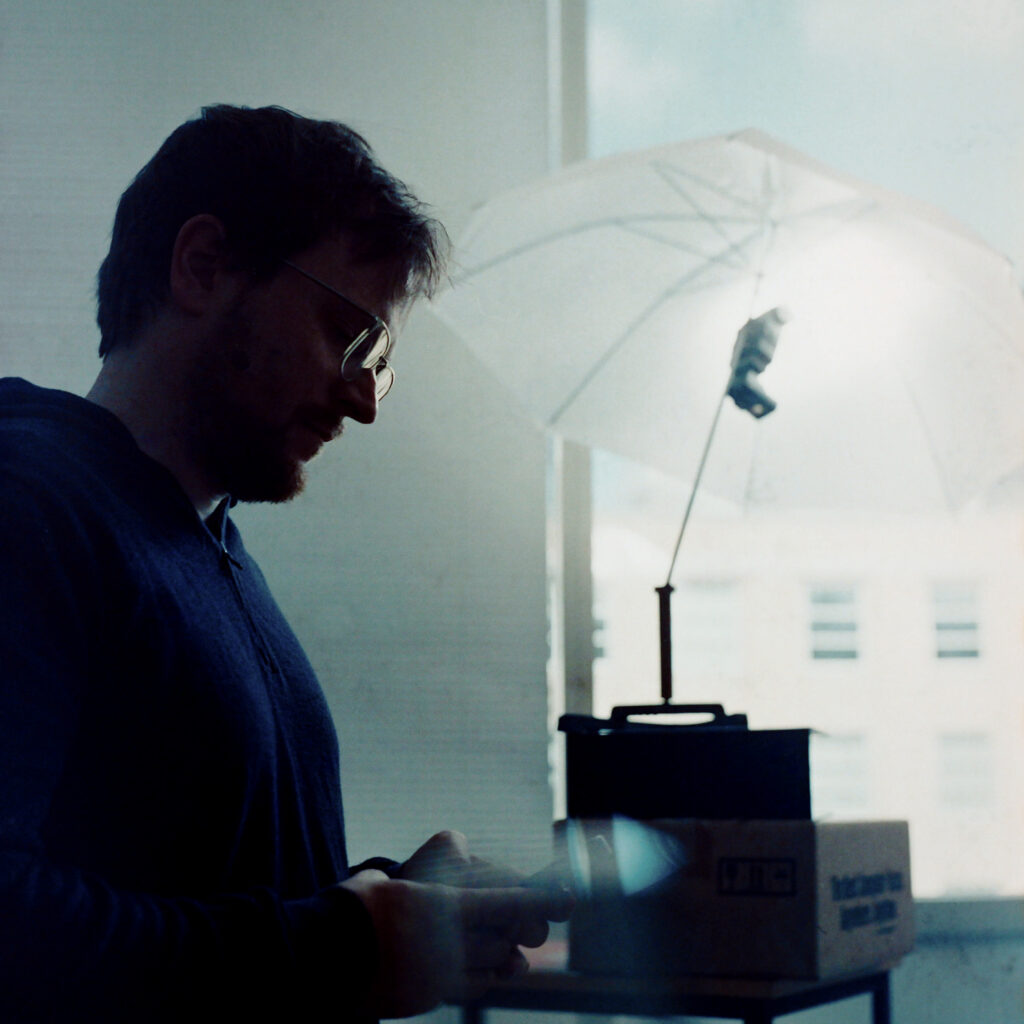 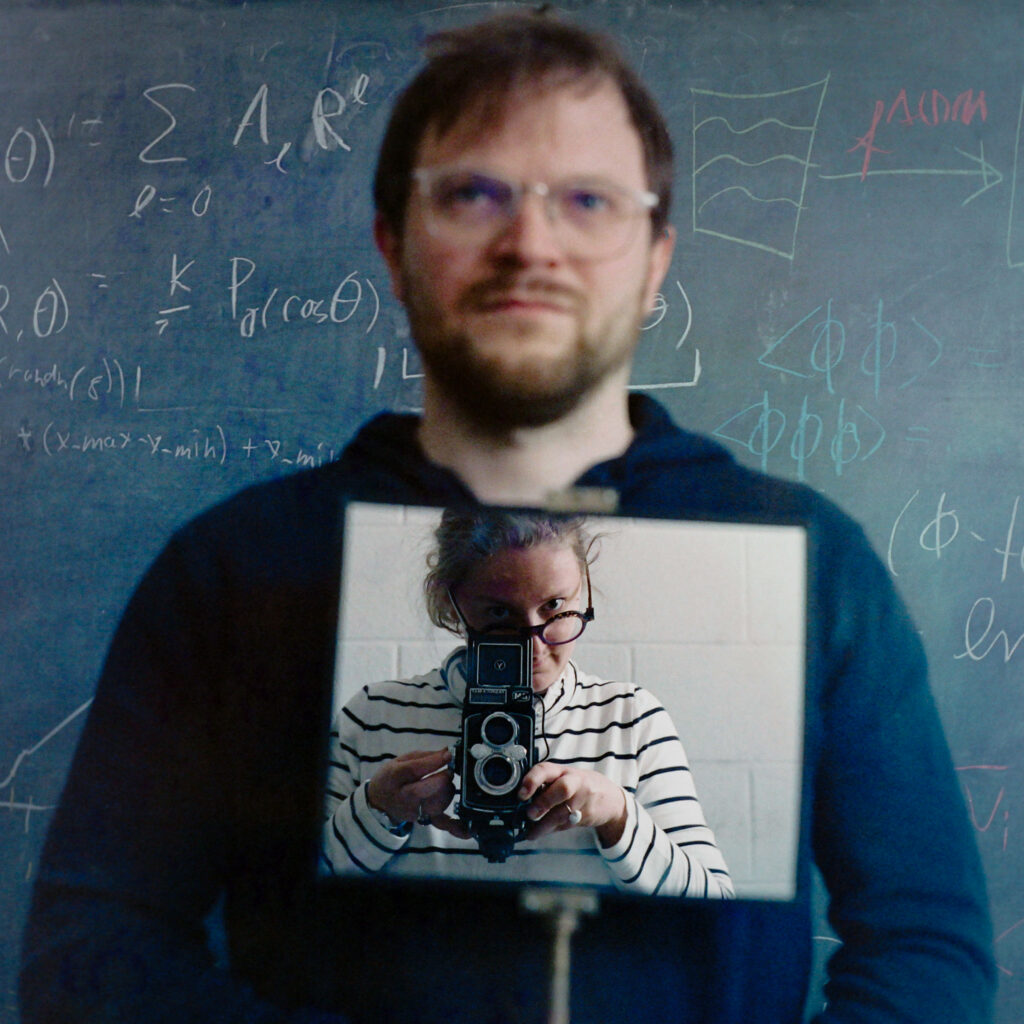 This was the last frame of the roll, and so I did the most me thing I could do: I found a way to put myself in the frame!

Honestly, it’s one the few ways for me to appear in photos, and that’s important too, because I’m there, and I take space.

So I put myself where is heart is, and I’m the focus!

All materials published on this website are the sole property of their photographers and may not be used or reproduced in any way without express authorization. 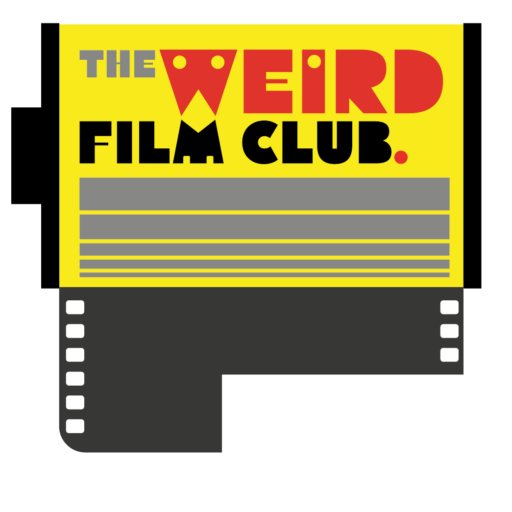